Seizing the Moment to Serve In early 2020, Jasmin had just begun her service with the Peace Corps in Ecuador. Everything changed in March when the pandemic hit and she and her group were evacuated from the region. “It was disappointing and a bit shocking, I didn’t get a chance to serve abroad because we were evacuated at the end of our training,” recalls Jasmin. News of the pandemic was still surfacing and nobody could really know what the future would hold. Jasmin had initially joined the Peace Corps because of her belief in the power of service. She was hoping to build relationships as part of her service abroad and make a real difference in the region.

It was a surprise to come home to Boston, after saying goodbye to friends and family, and after expecting to be away from home for two years. But when Jasmin got home, she knew she had to find ways to continue her commitment to service and begin to volunteer in her local community.

In the summer of 2020, after being home and witnessing the ravaging effects the pandemic had across the country and particularly in Chelsea, Massachusetts, Jasmin felt a deep calling to support her neighbors. “I was shocked by how negatively Chelsea was affected by the pandemic,” said Jasmin. “Knowing that there was something I could do to support the community meant a lot to me. The community was already facing great challenges before the pandemic, and the inequities were just exacerbated by COVID-19. I began questioning why it took a global pandemic to see the issues that already existed.” That is when Jasmin signed up to be a part of the Service Corps with Repair the World Boston.

For Jasmin, growing up, she saw her Jewishness and service as two separate aspects of her life. “As I started serving when I became older and especially through the Service Corps, it became clear to me that tikkun olam, repairing the world, was a vital part of being Jewish. Serving is now part of both my personal and Jewish values. Caring for others is why service is so important to me now,” said Jasmin. 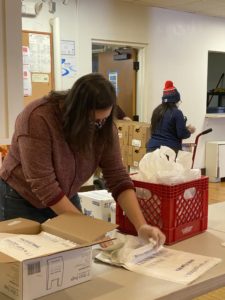 Jasmin spends most of her time serving with the Food Pantry at St. Lukes in Chelsea, Massachusetts. She has been inspired by the meaningful collaborations created during her meetings with local food pantries, food banks, schools, and other organizations like Healthy Chelsea and The Greater Boston Food Bank who are fighting for food access equity in the greater Boston area. “It’s amazing to see a group of non-profits from all over Boston come together and share resources that will not only uplift the organizations but allow for greater access to food for the members of the Boston community,” said Jasmin.

Jasmin spends her Fridays stocking the shelves of the food pantry and is in constant awe of how quickly food and supplies leave the pantry, highlighting the immense needs of the families for whom the pantry is so valuable.

“How I viewed service as a part of my life was reaffirmed in the moments after the pandemic. I knew I was following the right path,” said Jasmin. “Arriving back home last year was when I realized I could actually do service in my community, and that volunteering would become a core part of my life’s journey.”

Jasmin Bach (she/her) graduated from the University of New Hampshire in May 2019 with a bachelor’s degree in Spanish and Anthropology. She is a returned Peace Corps Volunteer who was recently evacuated from Ecuador due to the pandemic. She has a passion to do good and is excited to do so close to home. During her service with Serve the Moment she served with The Neighborhood Developers to build community and support St. Luke’s Food Pantry to provide food for individuals experiencing food insecurity. Jasmin will be spending 10 months working with The Neighborhood Developers as an Americorps volunteer.